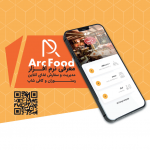 After the prevalence of COVID-19, I decided to go back to the circles and start implementing the shopping circle.
Due to my previous experience in making food ordering software and food court management, I started with one of the seemingly simple arcs of this circle, the Arc-food.
Arc-Food, to prevent the destruction of restaurants and food units against COVID-19, provided unique facilities for food units to manage and sell orders online and strengthen their internal systems to provide better services.
Due to the complete dominance of Snapfood, the lack of maturity in this market changed, the lack of investors in huge dimensions to compete in this market, we stopped the project and went to the field of FMCG. 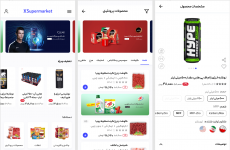 Arc Market was created to enable any supermarket without software knowledge to operate in online sales, robust and professional in their area.
A great product was designed, we created many possibilities for it, and the sellers' problems were solved radically, and at a negligible cost, it was possible for it to gain a significant market share, but unfortunately, for two reasons, the project stopped.
1- We had no capital left to continue working
2- Contrary to popular belief, shopkeepers did not cooperate to survive, despite seeing their extinction.
That's why I decided to stop the project before creating more debt and postpone continuing the work until better conditions and situations are realized. 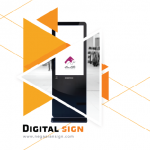 While producing digital sign devices, we had software for those devices.
Software for managing and distributing web advertisements, face recognition software, food ordering software, food court management.
But with the prevalence of COVID-19, the type of shopping change to online, and with the closure of shopping malls and the need to disinfect surfaces, and the unwillingness of people to touch the touch screen of our devices, the project stopped and began to build the shopping circle I did. 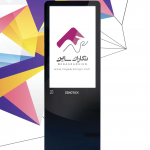 At the end of 2017, due to the growing market demand for digital signs, I decided to produce touch screen stands in Iran.
I bought the most famous structures in the world market, reverse engineered them, and designed and produced my unique forms by eliminating the defects in the global samples.
The molds making and design process was completed in Jan 2019, and before mass production began, the prevalence of COVID-19 integration closed global trade with China and, as a result, made it impossible to access LED panels, which led to a halt Became this project.

After the failure of the last project, there was much heavy debt left from that project, and I needed a quick income to settle them.
Looking at the market conditions and the technical knowledge and advertising experience I had in the past, I found a vacancy for routing systems in the Iranian market that was not professionally covered by any collection.
Because of my connection with hospitals in the Health Circle project, I started designing a hospital sign standard based on the American standard JCI, and we became known as a hospital sign reference in the country and implemented about 150 hospital projects.
After that, by studying 11 world-famous airports, I designed the airport sign standard for the first time in Iran and implemented it in Bandar Abbas airport, and that standard was communicated to 52 airports by the country's airports company and was implemented in them.
Next, with the advent of the tsunami of shopping malls in those years, I designed and produced unique backlight structures for shopping malls, and as a reference for the construction of shopping mall signs, we implemented many projects throughout the country.
In the end, after settling my debts and creating a solid financial reserve, I returned to the field of technology by constructing digital signage and continued the Negaaran Sign Company as a side business.

My first startup was a compelling, attractive, and accessible educational platform with about 450 schools and 20,000 students in less than three months after its launch.
The software was designed based on an honest look at the level of access for all students in the country using the internet with subscription-free educational information.
In this system focused on a class and student, academic Communication is placed under the supervision of parents and teachers by considering the relevant and valuable lesson contents as a social network.
Due to my limited knowledge and experience at the time and working on two major projects simultaneously, I was unable to prevent competitors from attacking, and the project was stopped with a note issued by the Ministry of Education at the instigation of competitors.

a second project that I was working on at the same time.
The Health Circle project was built following the circles' philosophy I designed to make medical access easy and fair for everyone in the community via the Internet.
A large project was designed that first introduced the patient to the system with a free medical diagnosis system, and then introduced the physicians and received treatment under the supervision of a physician and received paraclinical services and medicine in a network of centers within the system.
The patient was accompanied until complete recovery, and finally, the medical record was stored in the system for a variety of machine learning and data mining operations.
Due to unfamiliarity with political and governmental sensitivities, the large size of the project, and involvement with the health mafia, despite the strong investor who accompanied us in this project, the support suddenly disappeared. With the company's closure, The project was stopped.

The first company I registered with, I started advertising with it initially, and it developed quickly. After about a year, I started importing the raw materials needed by the company from China, and then I started importing other things and made an excellent income. But because my main interest was in technology and software, I stopped the company and started making my first educational software with the income I earned.

In the book of life, every page has two sides: we human beings fill the upper side with our plans, hopes and wishes, but providence writes on the other side, and what it ordains is seldom our goal.